The loss of happiness


Living beings have the ability to adapt to its environment. If you take a trip to Serangan Island in Bali you'll find a landfills there and do not be surprised if you find a lot of cows there enjoying the "buffet". Cows, meadow, cows, meadow? Not always. You can also find that landfills area are surrounded by shelters of people who earn a living in the vicinity. I saw a BBC documentary film titled Welcome to India (http://www.bbc.co.uk/programmes/b01n8278) that describes the human ability to adapt to life among the dense population in India which ranks the second most populous in the world.The documentary described how three families with different professions endure the circumstances and make a living from day to day. 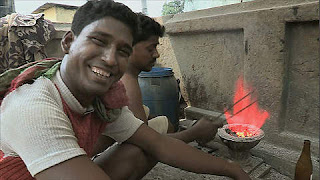 There is one scene that really caught my attention. It's a life of a group
of "miners", well actually mud collector, who start working after
midnight draining as much mud as possible from the culverts, transferring
the mud to water proof sacks. The city culverts is only enough to fit one person. The choking odor and dangers, such as poisonous snakes, rats, scorpion and God knows what-kind of deadly animals headquartered
in such place, lurking these hard working Indians, but all of these
does not lessen their determination. Oh, did I mention about the pile
of whatever shits part in that "mine"? They are working till dawn,
after approximately gained 30 sacks of mud, they try to sell them to
gold refiner at the Gangga riverside. Apparently they are a bunch of
gold miners, trying to collect the gold ore contained within the pile of dust in the city corners and of mud at the culverts. They live together with other 5-6 people in an already cramped simple room in a slum area, that seems to be un human for most of the people who are
lucky enough to be born in a better situation.

There is one significant question being asked in the interview that
really staggering and lingering in my mind. "What is home?" an
unexpected comment from these people who live under such poverty is
"Unity is strength, home is wherever your family are. You create your
own family, you meet brothers and sisters with people who came across
your path". From almost 60 minutes duration of the film that seems
like a poverty show, I really had a hard time catching a glimpse
impression of coldness, sadness, desperation or isolation. Instead,
qualities such as perseverance, dignity, genuineness, warmth, wisdom,
good sense of humor and togetherness filled your heart after
watching this documentary of heartfelt life in some other part of
reality, that you might consider as shit holes.

This documentary film reminds me of my interview with several Balinese friends regarding way of life in Bali during their childhood time. Those interviewees were born in the 70s. The description of Balinese way of life in the past from several journals of new world explorers, tradesmen, scholars, anthropologists collected until 1980s depicting Bali as a celestial place, paradise on earth. Very contrast to the nowadays poverty in India that I just witnessed. Compared to today's Bali situation, the life in Bali in the 70s, according to my interviewees, are filled with hardship and limitations or poor (not in the absolute
sense of poor of course), but they felt that they were more content, then. I understood that poor is not the right word to described the situation, it is more to the limitation of its era; example most people during that time walk bare foot because footwear was not in
fashion, nor available. Rather than sandals, Skin diseases caused by bacteria or fungus are more common at that time, everyone has it.

The two stories of two different world despite of it happened in completely different era, showed me a great lesson that human being can adapt to any kind of situation in life, as long as there is one thing that keep them going and that one thing might be the feeling of being "at home" that includes comforts, togetherness, unisolated feeling, unity that make a man can face all challenges of life.

There is an impression that the progress and development in Bali has
abandoned the "ark" of content feeling that was once experienced by its
people. There is a possibility that this is merely a psychological
phenomenon, experienced by most adults, that they are longing for the
connections to their childhood time, that evoke happy feelings. When I asked the same question to those who were born, one or two decades before the 70s, most of
them agreed to one thing; that (Bali) in the past, when they were still a child, their life was way better and happier than today.
Posted by Ananta at 1:28 PM

Thank you for visiting